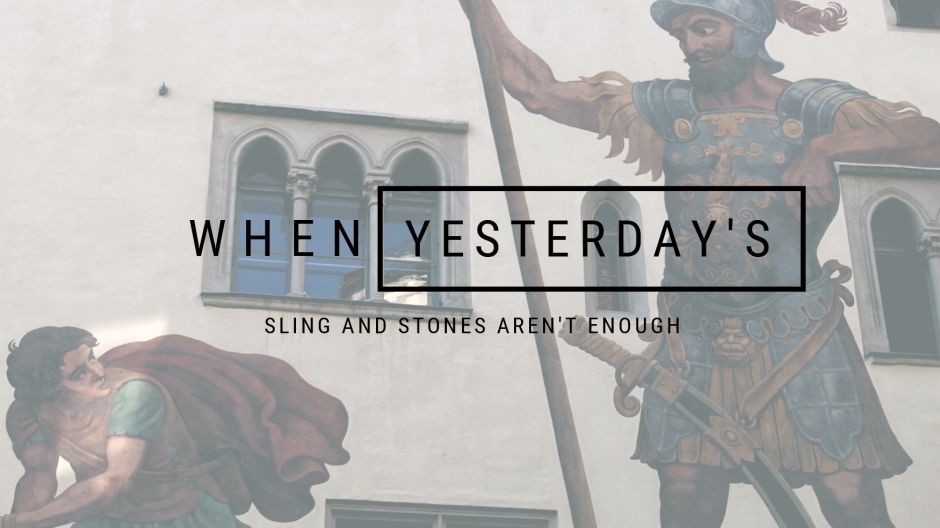 Possibly the most well known biblical story is David and Goliath. David, a ruddy young shepherd’s boy fights a Philistine monster who from his youth had been trained in the art of war, his name sounds as threatening as his cruel, ruthless vocation…Goliath.

We know the story well, David fights on behalf of an entire Kingdom with nothing more than five stones selected from the location of the pending battle (this could be a sermon in itself) and his well-used sling. Despite the concern of others, David was extremely comfortable and confident with his chosen weapons –

But David persisted. “I have been taking care of my father’s sheep and goats,” he said. “When a lion or a bear comes to steal a lamb from the flock, I go after it with a club and rescue the lamb from its mouth. If the animal turns on me, I catch it by the jaw and club it to death.  I have done this to both lions and bears, and I’ll do it to this pagan Philistine, too, for he has defied the armies of the living God!  The Lord who rescued me from the claws of the lion and the bear will rescue me from this Philistine!” (1 Samuel 17:34-36)

We know how the story ends, the pivotal point…David cuts off Goliath’s head with Goliath’s own sword and suddenly momentum changes. The Israelite’s who were previously filled with fear are suddenly inspired with courage, they charge the Philistine army and the rest is history. David wins his fight.

But what about David’s next fight?

If life was all about one struggle, one conflict, one challenge then maybe we could live off the virtue of this one story, but life is not that simple. Life is made of a series of consecutive struggles, victories, and losses that do not relent, in fact, they tend to escalate in complexity and intimidation until we leave this Earth.

David’s next assignment rendered his sling and stone approach impotent.

Whatever Saul asked David to do, David did it successfully. So Saul made him a commander over the men of war, an appointment that was welcomed by the people and Saul’s officers alike. (1 Samuel 18:5)

Yesterday’s slings and stones won’t work for today’s assignment. They worked for David when confronted with the lion, the bear, and even Goliath but now there is a new assignment, an opportunity that David would never have even dreamed of stepping into. The verse preceding this tells of a covenant made between Jonathan and David and an interesting transfer that occurred.

Jonathan took off the robe he was wearing and gave it to David, along with his tunic, and even his sword, his bow and his belt. (1 Samuel 18:4)

In a single day, David had gone from a sling and five stones to acquiring the finest sword in the Philistine army, that of Goliath’s as well as one of the finest swords in the Israel armory, the sword belonging to the son of the King. Imagine the symbolism when David wore Jonathan’s tunic, clothes reserved for the heir to the throne! And from this place, he steps into his next assignment.

It is not written in the text but I can only assume that the process and discipline that allowed David to become efficient with his sling are the same virtues that made David efficient and skillful with his new armory.

Killing any Goliath is a moment worthy of celebration and honour…but what about the next battle. It is admirable that we became efficient with the skillset that made that initial victory possible…but there is the next fight to consider, a fight that more than likely requires new armory.

So put down that sling, to pick up that new sword and then apply the same discipline that made the past victory possible.